Half of my life I lived in the Soviet Union, another half – in America.

I worked in the Soviet Union as a manager and a scientist and I worked in the USA as a cutter, a clerk, an accountant, a broker, a programmer, a system analyst. I graduated from colleges in both countries (the Moscow Textile Academy and Queens College in NYC).

For forty years I hear and read that capitalism is bad and that America is a bad country. I saw all kinds of protesters. I heard a lot of journalists, professors and elected officials who believe that socialism and communism are better. .

Certainly, everybody has right to her/his opinion.

However, as I lived many years In the USSR and the USA it is easy for me to compare what is better.

Let’s look today at facts and make conclusions. Then we can continue to discuss the question in the title of this post.

Several years I am renting during winter an apartment in a condominium in Hollywood, Florida. My landlord is from Cuba. He is a large trucks driver.

He bought this apartment 7 years ago as an investment. He lives with his wife in their own very nice house near Miami.

The photo below shows a deck of the condominium and a beach below. I meet daily people on the deck who own apartments here and have apartments or houses in Chicago, New York and other places. All of these people are working or worked before retirement. They are (or were) teachers, programmers, doctors, nurses, engineers, professors, government employees, etc. Some of them have or had their own businesses. 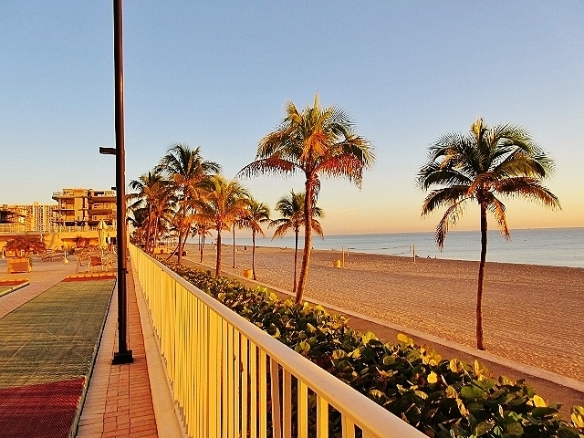 You can see in the photo a building that is under construction.

Picture #2 gives you a better view of it. The building will be finished soon.

$1,000,000. The interesting fact is that all apartments are already sold out.

Now, there are hundreds of condominiums in Hollywood and thousands of houses that cost more than 1 million dollars. All of them have owners.

How bad is America and how bad is capitalism if people who are working hard and have education can have wonderful apartments or houses, can travel, are free to choose their way and enjoy life?

I am proud that I am American!

One of them was: “Who was Edgar Cayce and where did he live?”

Only my friend Painting Pandit gave a brief answer.

Edgar Cayce is not a legend. What he did confirmed for years by a group of people.

Please read about him HERE.

You can get even better knowledge of his life and enjoy very much reading books about him.

You might be interested in his prophecies that are still to come and in many his readings.

In conclusion, I want to introduce to you several Edgar Cayce’s quotes:

“It is thought and feeling which guides the universe, not deeds.”

“When ye are prepared for a thing, the opportunity to use it presents itself.”

“You can never lose anything that really belongs to you, and you can’t keep that which belongs to someone else.”

Many years ago with a group of friends I visited the Madam Tussaud’s Wax Museum in London.

I remember that it was cold that day and I was wearing a short black leather coat.

After I examined all exhibits I stayed quietly waiting for my friends. There were three young

Japanese girls nearby who looked at the group of wax figures near me. Then they turned

to me and started to discuss something.

At that moment my friends came to me and I asked them if they were ready to go.

The Japanese girls were very surprised! They could not believe that a wax figure could talk!

Many years passed and now we have an artist/sculptor who makes even more realistic figures using new methods.

Her name is Carole Feuerman.

You can read an article in Wikipedia about her and her works HERE.

I also like an article about her art with images of her resin sculptures HERE.

America has more Nobel laureates in economics than any other country. There are thousands of experts in universities, banks, brokerage companies, insurance companies, etc.

Thousands of people work for the government and tell our presidents and the Congress what to do to keep economy growing and to keep people employed.

There is also a mighty Federal Reserve System. It is the central banking system of the United States. “It was created on December 23, 1913, with the enactment of the Federal Reserve Act, largely in response to a series of financial panics, particularly a severe panic in 1907…

The U.S. Congress established three key objectives for monetary policy in the Federal Reserve Act: Maximum employment, stable prices, and moderate long-term interest rates… The first two objectives are sometimes referred to as the Federal Reserve’s dual mandate… Its duties have expanded over the years, and today, according to official Federal Reserve documentation, include conducting the nation’s monetary policy, supervising and regulating banking institutions, maintaining the stability of the financial system and providing financial services to depository institutions, the U.S. government, and foreign official institutions…The Fed also conducts research into the economy and releases numerous publications, such as the Beige Book.”

With all this tremendous pool of experts how did it happen that the USA and many other countries were recently in the financial crisis and still are very slowly recuperating? Unemployment is still high, financial system is not very stable, interest rates are artificially kept very low and it especially hurts senior citizens.

Some people believe that it is a result of the fact that so-called experts in economics relied on the wrong economic models.

One of those people is  Nassim Nicholas Taleb. He warned long time ago that the way financial and monetary policies conducted was wrong and will lead to a financial crisis.

Who is this man? I will summarize what I know after reading information on the internet and after reading his books “Fooled by Randomness” (2001) and “The Black Swan” (2007).

Nassim Nicholas Taleb was born in a mighty and very rich family. Then the family lost almost everything. He got a good education and wanted to pursue his interests in economics, mathematics, philosophy. To be able to do what he wanted he needed  financial independence. So he applied his efforts and his knowledge to this particular purpose and made a fortune. At the same time he proved that his theories are valid and usable.

You’ll find more information about Nassim Nicholas Taleb in the article below. I hope you’ll find time to read the article. It is very, very interesting.

I have no doubts that Taleb is today’s intellectual giant, that his views on economics and politics, his philosophy must be studied and applied in our society.

I think that it is a must to read mentioned above Taleb’s books. They are not written for experts. They are serious and very personal books written by a person who learned views of many intellectual giants before him and decided whom to believe and what to believe.

Below is an article about Taleb’s tweets. I enjoyed it. Hope you’ll like it too.