Before writing more stories about women I want to introduce to you quotes below. They show my understanding of role of women in our world.

A woman is like a tea bag – you can’t tell how strong she is until you put her in hot water.

Women have always been the strong ones of the world. The men are always seeking from women a little pillow to put their heads down on. They are always longing for the mother who held them as infants.

Man does not control his own fate. The women in his life do that for him.

The age of a woman doesn’t mean a thing. The best tunes are played on the oldest fiddles.

Ah, women. They make the highs higher and the lows more frequent.

Women who seek to be equal with men lack ambition.

God gave women intuition and femininity. Used properly, the combination easily jumbles the brain of any man I’ve ever met.

However, I want to share with you a video below.

Please look at the man, at .his eyes, at results of his efforts.

I am very impressed!

He found his path, he followed it for years.

It was not easy but he was happy.

Is not it what everyone wants?

It was raining very hard and I opened a window to enjoy sights and smells.

A man and a dog went out from our building and turned left.

I thought: “Why were they going for a walk in such weather?”

I grabbed my camera and was ready to make a shot when they pass a huge bush on their way left.

However, suddenly they appeared before me. 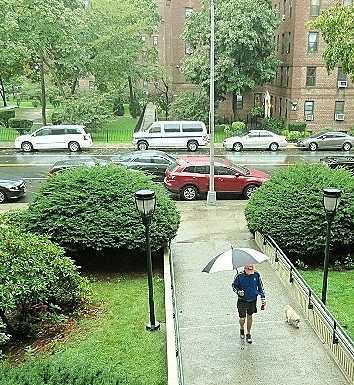 The first quote gives me hope that I am an educated man.

The second one makes me think and the last quote makes me laugh.

I hope you’ll like at least one of them.