They met in the fall of 1921 in the studio of painter Alexei Yakovlev. 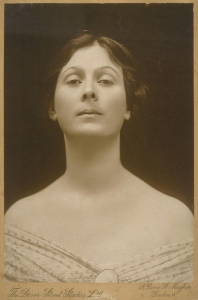 At that time Isadora Duncan was 44 years old. She was a celebrity in Europe. Vladimir Lenin liked her style of dancing and invited her to come to Moscow and to open a dance school. Isadora knew only several Russian words.

She was born in San Francisco and started dancing at the young age. “She rejected the rigidity of the classic ballet and danced barefoot using more natural rhythms and movements.”

At the age of 21 Isadora went to Europe to seek recognition and in four years became very successful in Budapest. Then she settled in Paris and toured Europe.

He was son of peasants. He started to write poetry at the age of nine. After he published his first two books of poetry about love, nature and simple life in 1916 he became one of the most popular and loved Russian poets. 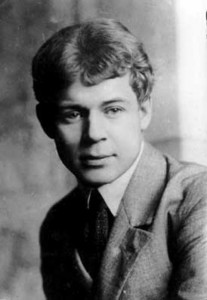 Why did they marry? There was a 19 years difference in age. They could not speak to each other. She did not know and could not understand his poetry and I doubt very much that he believed that she was a great dancer (classical ballet was in Russian traditions).

Did they looked at each other and fell in love?

I doubt it very much.

Let’s look at their love lives before they met.

From ENCYCLOPAEDIA BRITANNICA: “Her private life, quite as much as her art, kept her name in the headlines owing to her constant defiance of social taboos. The father of her first child, Deirdre, was the stage designer Gordon Craig, who shared her abhorrence of marriage; the father of her second child, Patrick, was Paris Singer, the heir to a sewing machine fortune and a prominent art patron. In 1913 a tragedy occurred from which Duncan never really recovered: the car in which her two children and their nurse were riding in Paris rolled into the Seine River and all three were drowned.”

Before marrying Sergei Yesenin Isadora Duncan many times stated her abhorrence of marriage.

Did she fall in love with Sergei Yesenin so much that she changed her view on marriage?

Not likely. I believe that she was ordered to marry him and to take him from the Soviet Union.

Initially Sergei Yesenin supported Bolsheviks as he believed that they would give land to peasants. But soon he became disillusioned and began criticize the government in his poems. The Soviet government wanted to get rid of him.

What about Sergei Yesenin’s decision to marry Isadora?

From NEW WORLD ENCYCLOPEDIA: “Blessed with good looks and a romantic personality, he fell in love frequently… His first marriage was in 1913, to a co-worker from the publishing house by the name of Anna Izryadnova, with whom he had a son, Yuri. (During the Stalinist purges, Yuri Yesenin was arrested, dying in 1937 at a Gulag labor camp.)

… In August 1917, Yesenin married for a second time to the actress, Zinaida Raikh… With her he had a daughter, Tatyana, and a son, Konstantin.”

Thousands of women dreamed about Sergei Yesenin and it is highly unlikely that he married Isadora Duncan because he fell in love with her.

I am sure that he married her to be able to get out of the Soviet Union (it was possible only if authorities permitted it).

After marriage Yesenin accompanied his wife on a tour of Europe and the United States. He hoped that he would be accepted very well in the United States and in Europe where there were many Russians.

However, at that time many people on both continents believed that the couple were Soviet agents and Russians abroad did not want to have anything to do with Sergei Yesenin.

What could he do? He knew only Russian, he could not communicate with his own wife, he had no friends.

Sergei started to drink. His smashing up of hotel rooms received a great deal of publicity in the press.

Yesenin returned to the Soviet Union in 1923. There he published some new poems. He saw that the government started a campaign of destroying peasants but he could do nothing about it.

“…he immediately became involved with actress Augusta Miklashevskaya and is believed to have married her in a civil ceremony, although it’s known he never obtained a divorce from Isadora Duncan.

…that same year he had a son, Alexander, by the poet, Nadezhda Volpin…” Alexander Esenin-Volpin grew up to become a prominent poet, dissident and mathematician.

“The last two years of Sergei Yesenin’s life were filled with constant erratic and drunken behavior, but he also created some of his most famous pieces of poetry. In the spring of 1925, a highly volatile Sergei Yesenin met and married his fifth wife, Sophia Andreyevna Tolstaya, a granddaughter of famous nineteenth century Russian novelist, Count Leo Tolstoy. She attempted to get him help, but he suffered a complete mental breakdown and was hospitalized for a month.

…Two days after his release for Christmas, he allegedly cut his wrist and wrote a farewell poem in his own blood; the following day hanged himself from the heating pipes on the ceiling of his room in the Hotel Anglettere, dying at the age of 30. Some believe that the suicide was staged, and in actuality he was killed by GPU agents, although there is no actual proof for this theory.”

Isadora died on the night of September 14, 1927 in Nice, France, after “her silk scarf, draped around her neck, became entangled around the open-spoked wheels and rear axle, hurling her from the open car and breaking her neck”.

I am happy, I have kissed a woman,

I have slept in grass and flower-bed,

Hit a dog or kitten in the head.